The use of candlestick charts is done for the purpose of allowing the digital options trader to know more about market sentiment prior to executing a trade. The information these charts provide exceeds what can be derived from Standard bar charts, where high and low are the main focus points. Candlestick charts will instead show how open and close price relationships at the correct time.

One of the main benefits to binary options traders is that candlestick charts make it easy to spot an asset value trend reversal or a stability trend in the asset value. This can be one of the more difficult tasks to accomplish when trading binary options. Additionally, candle charts can be used to select different entry and exit points.

The following is an example of the basic candlestick: 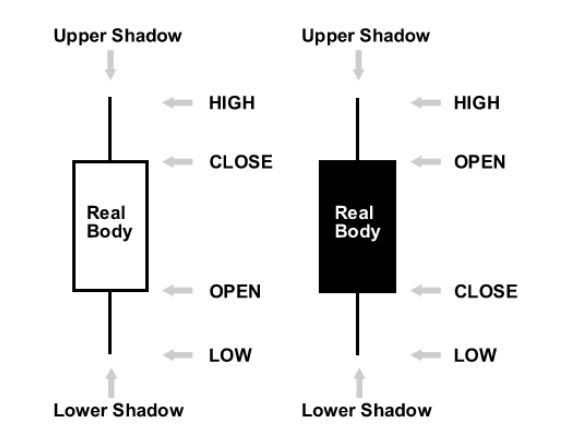 The length of the body represents the gap between the open and close price, with the wicks representing the highest and lowest prices for the time period. The thicker body allows digital options traders to quickly see just how close the opening and closing price are. The shadow area, which represents asset price ranges that are the least likely to be reached, may also easily be noted. 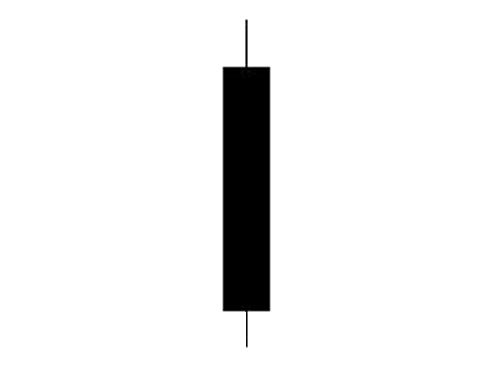 This basic bearish candle is just the opposite, with the solid body signalling a decrease in asset price. Again, length matters, as this signifies just how extensive the decrease actually is. 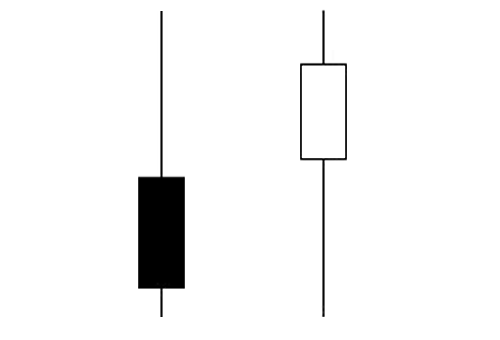 The hammer makes it easy to spot a downward trend in asset value. This signal must include a shadow that is at least 2x the length of the candlestick body.

The shooting star is mainly shadow. This shows session low points that occur just after an uptrend, or while an uptrend is occurring.

This Harami pattern shows two candlesticks. In this pattern the small body contrasts the large body from the prior trading session.

The following provides a simple explanation of some of the more widely used candlestick patterns:

The doji occurs when the open and the close for the day are the same. It depicts indecision and can often mean in pending weakness in an uptrend.

In an uptrend, on the day a small white body occurs. The next day prices open at new highs and quickly sell off, closing below the open of the previous day.

In a downtrend, a small black body occurs. The next day prices open at new lows and then quickly rally to close above the close of the previous day.

This image of candlestick patterns in action may appear complicated upon first glance. It will take some time to memorize each of the different patterns. Digital options traders who wish to use candlesticks as an indicator are advised to memorize the most basic symbols first and then move on to the more advanced symbols.

In digital options trading, candlestick patterns can serve as a strong source for Fundamental analysis. By being able to quickly spot patterns based on trading behavior, the trader will immediately place themselves at an advantage. 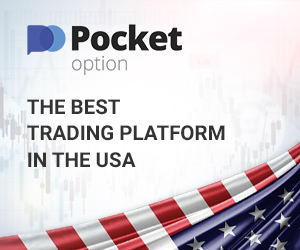